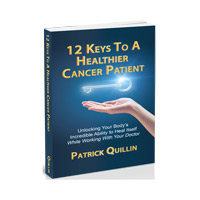 Meet Dr. Patrick Quillin Who Can Help You Get Back to The Prime of Your Life

After 30 years specializing in Cancer Nutrition I have consulted with 1000’s patients around the world. Many medical doctors and physician’s consult with me for their own personal needs. For the past several years I have been a leading spokesperson on The Truth About Cancer. My book can help you restore your health.

SUMMARY: Dr. Patrick Quillin is an internationally recognized expert in the area of nutrition and cancer. He has 30 years experience as a clinical nutritionist, of which 10 years were spent as the Vice President of Nutrition for Cancer Treatment Centers of America where he worked with thousands of cancer patients in a hospital setting.

He has earned his bachelor’s, master’s, and doctorate degrees in nutrition and is a registered and licensed dietitian (RD & LD) and Certified Nutrition Specialist (CNS) with the American College of Nutrition. He has appeared on over 40 television and 250 radio shows nationwide and is a regular speaker for medical and trade conventions, including ACAM, A4M, American Association of Naturopathic Physicians, and Integrative Medicine. He has been a consultant to the National Institutes of Health, U.S. Army Breast Cancer Research Group, Scripps Clinic, La Costa Spa, and United States Department of Agriculture; taught college nutrition for 9 years, and worked as a hospital dietitian. He obtained an Investigative New Drug number (48,676) from the Food and Drug Administration in September of 1995 to conduct research on bovine cartilage in advanced cancer patients.

His 17 books have sold over 2 million copies and include the best sellers HEALING NUTRIENTS and BEATING CANCER WITH NUTRITION. (now translated into Japanese, Korean and Chinese) He edited the textbook, ADJUVANT NUTRITION IN CANCER TREATMENT and organized the 1st, 2nd, and 3rd international symposia on “Adjuvant Nutrition in Cancer Treatment. He is listed in “Who’s Who in Science”.

Since 1979, Quillin has accrued at least 15 hours per year in continuing education, including ACAM, Scripps Clinic conference on “natural supplements: an evidence based approach”, Institute of Functional Medicine “cancer as a chronic disease”, and many comparable graduate level courses

Over 250 radio shows, including National Public Radio and many nationwide syndicated programs, such as Dr. Robert Atkins, Prescription for Health, and many others.

-Variations in Human Blood Glucose (Ph.D.), 1981
-The Development of a Nutritionally Oriented Teaching Game to be Used in a Coordinated Nutrition Education Program (M.S.), 1979